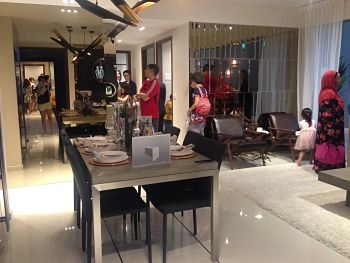 Over the weekend, we went to check out the new Executive Condominium (EC) launch at Canberra - The Visionaire.

We had heard a lot of the hype prior to our visit. It was advertised as the first smart home EC in Singapore, "one that already has the latest technology and infrastructure to integrate with your smart lifestyle" by the time you receive your keys. We were intrigued -  the concept of having a connected home had taken off in many parts of the world, but this was the first major development of its kind in Singapore. And so we headed down to Canberra to take a look.

The interior of the Visionaire showflats was aesthetically attractive, designed to be modern and sleek.

But what got our attention was the promise of "intelligent living at your fingertips". Huge displays outside the showflats highlighted the 10 smart devices that make up a smart home, which included a smart washing machine, lighting bulbs and digital locksets which could be controlled remotely. This would allow you to monitor and control your home even when you are away.

Even more interesting was a 20-min showcase of the smart home of the future. Numerous fancy features were presented to us, including:

We had to say that our imaginations were captured. Not so much by the actual presentation itself, since we were slightly skeptical that all the features would be used. But the idea that we were at the start of something big - that we were stepping into a new age, when home automation would be part and parcel of people's lives.

The staff there did share that the smart home that they had just presented to us was conceptual. They wanted to show us the potential of the smart home, even if not all the technology mentioned was available yet.

The Smart Home Has Arrived

We do not doubt that the idea of the smart home has arrived in Singapore. The big players, such as the telcos, have already announced that they are taking steps in this direction. Starhub has recently started trials of its home surveillance system, and Singtel has already been developing a set of solutions to leverage technology at home to live more comfortably for several months.

It may  take a while for the smart home to become a reality in Singapore, though. The Visionaire is expected to receive TOP in about 3-5 years, and it's not so clear how long trials for other smart home devices would take.

Well, for those who are raring to go and are keen on setting up their smart homes now - could we not so subtly point out that igloohome is very much available for order? We have the smart lock technology ready, which is literally your first point of entry to a smart home. Why wait?

igloohome Competes in Chinese Reality Show The Next Unicorn (寻找独角兽)

igloohome Raises USD$4m in Series A Round, led by Insignia Ventures Partners