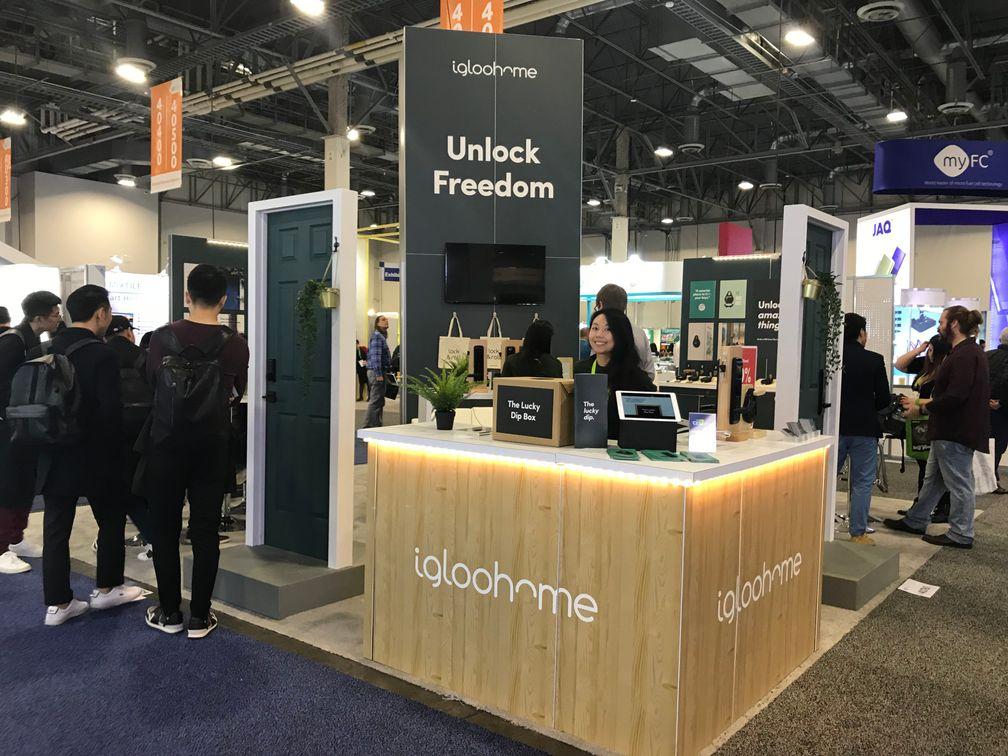 4 days of gadget craze, media announcements and the unveiling of new and exciting products - CES 2018 chalked up over 170,000 attendees from more than 150 countries! CES fever was affecting the world, and igloohome was proud to be part of it.

One of the biggest highlights of CES 2018 was voice assistants. Google Assistant was out with a bang this year, with huge LED screens on the Las Vegas strip flashing adverts, and with 'Hey Google' creatives plastered over the Vegas monorail.

Amazon Alexa was noticeably quieter in comparison. There was a lounge dedicated to Alexa, but Google Assistant was the one that dominated the event, with ambassadors attached to brands that had products integrated with Google Assistant. We saw Google ambassadors in their distinctive white jumpsuits at almost every turn.

Across halls and halls of seemingly endless devices and concept presentations, we saw prominent spaces created by the top tier media in the tech realm. These included the likes of CNET, Techcrunch and Engadget, who wanted to have their presence felt. Some of these media brands also held talks for audiences to learn more from thought leaders in tech.

VR, elaborate motion sensors, 3D TVs which do not require special glasses, robots, pet toys that allow their owners to still have face time even when they are away, self-driving cars - we had glimpses of all of these while scanning the exhibition floors.

Last year, igloohome had a booth at Eureka Park at the Sands, where hundreds of other start-ups showcased their innovative products and services.

This year, igloohome placed ourselves in the Smart Home section of the main exhibition hall at the Sands, so that we were up together with the biggest names in the industry.

Our slogan at the booth was Unlock Freedom, encapsulating the idea that our smart locks and app give you the freedom to roam and yet still be able to manage access to your home at any time, from anywhere.

We had our full range of products on display, from the popular Keybox and Deadbolt 02, to the recently launched Mortise. Our upcoming products were showcased as well - some of them were still at the prototype stage, but we were excited to give attendees a sneak peek of what was coming up for igloohome.

igloohome products are already integrated with Google Assistant and Amazon Alexa, and so we couldn't resist showing off how they worked. Different commands were available for visitors to try, such as the creation of PIN codes or bluetooth keys by interacting with the voice assistants. Monique, Google ambassador for igloohome, was a joy to have with us!

As igloohome has a full suite of access solutions including a dashboard for enterprises and a wall terminal catered for commercial spaces with lift lobbies, we dedicated one section of our booth for business managers/owners.

A full-on kiosk was created for our Keybox, which presented it in different states - locked, unlocked, with a longer shackle accessory, and in a limited edition white. We had a lucky dip going too, for visitors at our booth to win igloohome products and merchandise, that included tote bags, pens, iRing phone accessories and more.

IE Singapore came by our booth, and filmed a video of it so that they could share it on Facebook (they did say that they really liked the design too)!

igloohome spoke to numerous distributors, business owners and developers at the event. Many of them showed great interest in our products and how they work offline, especially as most other smart devices at the Smart Home area are dependent on wifi. (And we have to say that unfortunately, wifi connections were terrible at CES 2018.)

Many meetings were set up for follow-ups in the respective regions, including the Americas, South-east Asia, Europe and others. The Straits Times also featured igloohome in its article on the event.

At the Sands, a massive pinball machine was set up for Google Assistant, purely to give away freebies, and queues to have a chance to interact with the voice assistant snaked on for hours. We were definitely tempted to have a go (and win some Google devices), but exercised a lot of willpower to resist the urge to do so.

We really liked the Ring doorbell set-up, which had a whole garage, driveway and even a jeep positioned at their booth space to create the full experience of a home.

After CES, we caught the Intel light drone show which was held at the Bellagio fountains, and which unexpectedly took our breaths away. Watching the many pin-pricks of light form spectacular patterns in the sky to the music, with the water jets dancing and then exploding into a grand climax, was mysteriously magical.

What can we say? CES is definitely an experience to remember.

Smart Gadgets for the Elderly

Living Tech and the 5 Cs