Event, Smart Keybox, In the Media 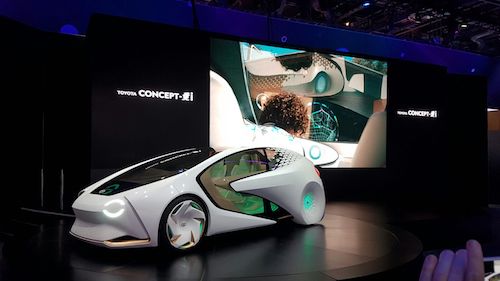 Just the world's biggest tech show - that's all. Where ideas, innovation, industry leaders, enthusiasts and many more meet. In Las Vegas, with exhibitions spanning the area of 50 football fields. That was CES 2017 (Consumer Electronics Show).

And that was where igloohome was during 5-8 Jan.

This year's CES marked its 50th anniversary, cementing its position as the major tech event of the year. Most big names in the tech industry were there to showcase products, make press announcements, and essentially unveil the future of tech. Samsung, Panasonic, BMW, Volkswagen, Sony - just to name a few.

Some of the most exciting happenings included the unveiling of the Faraday Future super fast electric car. It is said to be able to accelerate from 0 to 60mph in just above 2 secs. This is faster even than Tesla's best model and any other electric car in production.

We were excited to see the demonstration of the car in action. Initially, there was a bit of an awkward moment when the car was supposed to self-park after being activated by voice control, and nothing happened. It worked on the second attempt though!

Due to high demand, you had to sign up for scheduled tours to get up-close and personal with the car. Unfortunately, we were all tied up at our booth, so we didn't have the chance to put our names on the list.

Other interesting devices we spotted at CES included a device that allowed you to engage in lucid dreaming - meaning you get to control your dreams. It does so by pushing electric impulses to the brain. We could see the appeal of this, but its effectiveness had yet to be determined. Worth checking out though!

VR was trending this year, which explains the range of activities you could do in VR, such as exercising, driving and so on.

Something else that caught our eye was a smart bikini - one that would let you know when you have received a certain level of UV rays, so that you would know to get out of the sun before you get a sunburn.

Yes, we were quite amused, but well, it does appear that there's a market for it. And sorry to disappoint - we only managed to take a photo of the poster of the smart bikini, and not of the models strutting up and down in it.

Sexy cars were on display as well, and it really felt like we were taking a peek into the future.

igloohome was in the thick of all the buzz and energy, at Eureka Park. Traffic was high, and we were happy to let attendees test out our products and our app, and answer any questions they had.

The American reality TV series, Shark Tank, was having its casting call at CES as well. Auditions started at 8am, but potential candidates already started queuing from 5am. When we arrived, there was a long queue snaking around the hall.

Despite the tough competition, we were shortlisted for the next round! Preparations for it are already underway. Watch out world, we could be appearing on TV if we get through this round!

On an unrelated note, we attended the launch of Bluetooth 5, which is said to have quadrupled range, twice the throughput, and up to 6 times the messaging capacity of its Bluetooth 4 counterparts. Just a reminder of how quickly technology is progressing these days.

CES TV specifically came by our booth for an interview with CEO of igloohome Anthony. The segment "Our Connected World" is now available for viewing here. Digital Trends was also keen to feature our Keybox, and the article can be found here.

Many distributors and potential partners headed down to our booth to try out our Keybox and smart locks for themselves, and were impressed by the offline technology.

Laurent from IE Singapore dropped by too, for a quick catch-up. igloohome definitely appreciates the support provided by IE Singapore!

And so at the end of 4 days of non-stop action, lots of excitement, gadgets which included the bizarre, the intelligent and the amazing, it was a wrap. CES was a first for igloohome. Although undoubtedly tiring, it's hard to deny that the passion and drive of the 170,000 who attended were addictive.

We were pleasantly surprised to find ourselves on The Straits Times after the event, which talked about how igloohome and other Singaporean companies had made it to the global tech stage. The article can be found here.

Post-event, the adrenaline has yet to subside.

Being surrounded by the latest advancements in technology has fuelled us further. We had a glimpse into what's to come and we're raring to take it on.

The future has never felt so close before.

5 Weird Locks You'll Be Surprised Were Ever Made

Smart Home Gadgets that work as well as they look

Smart Gadgets for the Elderly