Event, In the Media, Smart Lock

igloohome Competes in Chinese Reality Show The Next Unicorn (寻找独角兽) 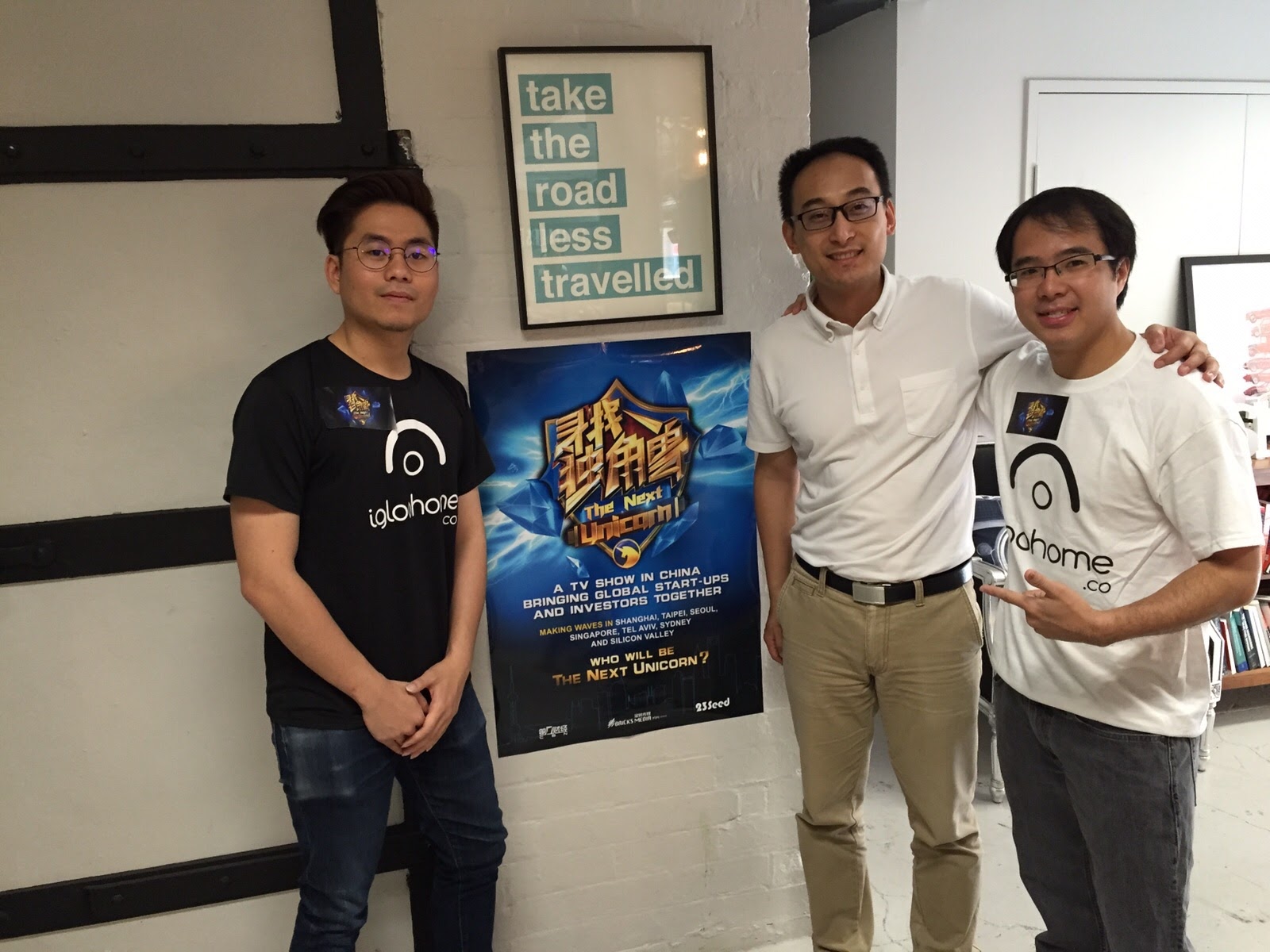 igloohome makes it to TV! We recently participated in the Chinese reality show The Next Unicorn (寻找独角兽), in which start-ups from all over the world compete for the prize of RMB10 million (SGD$2 million). The trailer for the show is available here. It was definitely an exciting experience for us!

It's currently airing in China now, with the first episode broadcast on 25 April.  Even though igloohome doesn't pitch in the episode, the other start-ups' pitches and the judges' comments on their products are really interesting to watch.

Here is a Q&A session (part 1 of a 3 part-series!) with the founders of igloohome to find out more about what went on behind the scenes of the auditions for the show.

Q: How did you first hear about the competition and what was your reaction?

Anthony: We were based in Sydney at that point of time (end of 2015). We were just having a casual lunch at our co-working space Fishburners, when we saw on our mobile phones an email newsletter informing us about the competition. The prize money definitely got our attention - SGD$2 million was a huge amount. Also, it said that if we got through the first round, we would get an all-expenses-paid trip to Shanghai for the finals.

What made it even more attractive was that the judges were very prominent. We knew Peter Davidson was a seed investor in Paypal, and that he has never lost any money in investments before. We felt like it would be amazing to have the chance to pitch to him.

Actually, just the exposure for igloohome alone to all the experienced judges was enough to convince us to take part.

Anthony: We submitted our application and we got informed quite quickly that our audition would be in 2 days. We deliberated whether we should pitch in Mandarin - they did tell us that the competition would be held in China and that hosting and all would be in Mandarin. In the end, we felt like we were more comfortable speaking English, so we went ahead with that in the end.

Before the audition, I happened to speak to an unassuming man while waiting for my turn, and eventually found out that he was Mr Daniel Shi, CEO of 23Seed - platform for investors and start-ups in China, and the brains behind The Next Unicorn. He was one of the 5 judges at the audition round, together with several other venture capitalists in Australia. I was surprised to see him coordinating the teams in preparation for their turn, and had new respect for him. I later found out that it was his vision to bring international teams to compete on a start-up platform in China, making this was the first of its kind there, and I was impressed by his efforts to make this work.

Q: Tell us more about the audition.

Anthony: They put a microphone on me and had the video camera trained on me. They said the audition round wouldn't be on TV, and we're just filming for their records, but still I did feel a bit conscious. The judges were listening attentively during the 5 minute pitch, and asked quite a number of questions after. They asked quite a few personal questions about previous setbacks, and I was caught slightly off-guard, but in the end it was alright.

Q: What were you thinking about after the audition?

Anthony: We knew that the channel on which the show would be aired - China Business Network (第一财经) - is the official financial news channel in China. Many influential decision-makers regularly tune in to the channel to find out about business in China and beyond. We definitely hoped we had made a good impression. We also found out that the format of the show would be like a cross between reality show Shark Tank and The Voice of China, so we thought that would be fun too.

Q: Did you think about how far you could get?

Anthony: We didn't think so far, but felt like we had a reasonably good chance to get into the finals as we felt that we were solving a real pain point in the market. Those who had tested our product were all very excited. The judges had responded quite positively, which was a good sign. We received the invitation to head to China a few days after!

Later on, I found out that The Next Unicorn had gone to over 7 cities, which included Seoul, Singapore, Tel Aviv and Silicon Valley and auditioned over 1000 start-ups. I was very glad that we were selected to head down to China.

Q: So you just packed your bags and headed to China?

Anthony: Yes, we did! Of course, some of our investors were concerned that  our operations would be affected by our trip to China, but we made sure everything was settled before we left. The rest of the team was extremely supportive and excited, and kept giving us moral support over Whatsapp. Our families were thrilled to hear the news too.

Anthony: We can't say it now, you'll need to watch the show to find out! But we did spend a number of days in China...

Q: Given that igloohome has not appeared yet, are you concerned about how you'll be like on TV?

Anthony: Yes definitely. Nervous about what they would show, but also excited to see igloohome appear. I hope we'll turn out fine!

igloohome Raises USD$4m in Series A Round, led by Insignia Ventures Partners