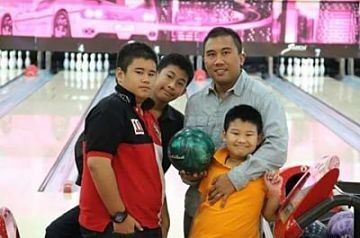 igloohome wishes all Dads out there a happy Father's Day! We know that it was officially last Sunday, but it doesn't mean that any ordinary day can't be a day to thank our Dads for all they have done for us.

We wanted to show our appreciation for all the fathers out there who have kept the home and family safe, so we held a Facebook Giveaway for 2 lucky winners to get the igloohome smart lock free for their Dads!

Our Giveaway was shared over 400 times on Facebook, and we felt all warm and fuzzy reading some of the submissions, which expressed much affection for their Dads. We are sharing some of the photos and stories here, just so we can spread the love!

Jason Chew shared how his Dad is someone of little words, but who shows his support, care and concern through actions instead of words.

His Dad worked hard to provide for the family as a sole breadwinner, and also looked after his aunt and grandma who has been staying with them since young.

Jason mentioned that his Dad is his greatest support in life, and the reason why he is able to form a family at a young age. Jason also expressed his gratitude for what his Dad has done for him and his family.

Sweetie Pheng Tan said that her Dad has a good memory (especially with passwords!) and is forever keen on learning and has been able to get the hang of many new technologies. Age is not a barrier for him. Her Dad has been wanting to buy a good high-tech lock for the home, but most of them are considered costly to him.

Sweetie wanted to thank her father for devoting himself to the family, and wanted to pamper him and express her appreciation for all his sacrifices. She felt that in view of his sheer love for his kids, she wanted to present him with a gift.

Irfan Ozil shared how his Dad always puts others before himself. He always gives them good advice and encouragement to pursue their dreams. Irfan called his Dad Superman, as it is not easy juggling duties at home and also at work. Irfan's Dad instilled in him and his brothers values such as to respect elders, and to work hard in life for success. Irfan even wrote a poem for his Dad, and here is just the last stanza:

Riqhelmi Shah called his Dad a Super Hero Hulk! He mentioned how his mother has a permanent illness and his Dad works 2 jobs day and night to support the family, not once complaining about being tired.

Riqhelmi's Dad would send him and his siblings to and from school despite only getting to sleep 2 hours. He said that his Dad will do anything for them, and will be there for them no matter what happens.

Here, we have 2 more photos which are absolutely adorable.

Vincent Lee Wee Ping (left) commented that this Dad needs the igloohome smart lock to keep the storm troopers out!

Along with the sweetest photo of father and son shaving (or pseudo-shaving), Eddy Sharifah (right) said that he would like to win our lock for his Daddy.

Other than the photos and stories, we also received submissions that talked about how the igloohome smart lock would be great for their Dads.

Kathy Woon Tan mentioned that her Papa would no longer have to wait outside if he forgets the keys while Mum is bathing or out for groceries. Rachael Yin said that she always forgets her house keys, and now she can open the door on her own when she comes home late, without having to wake up her Dad.

We were touched by everyone who commented & shared for their fathers, and decided to create a special discount code so that they could get the igloohome smart lock for their Dads to show him how much he means to them!

Do something special for your Dad today!

Tips to keep COVID-19 at bay

How it works: Airbnb Connect