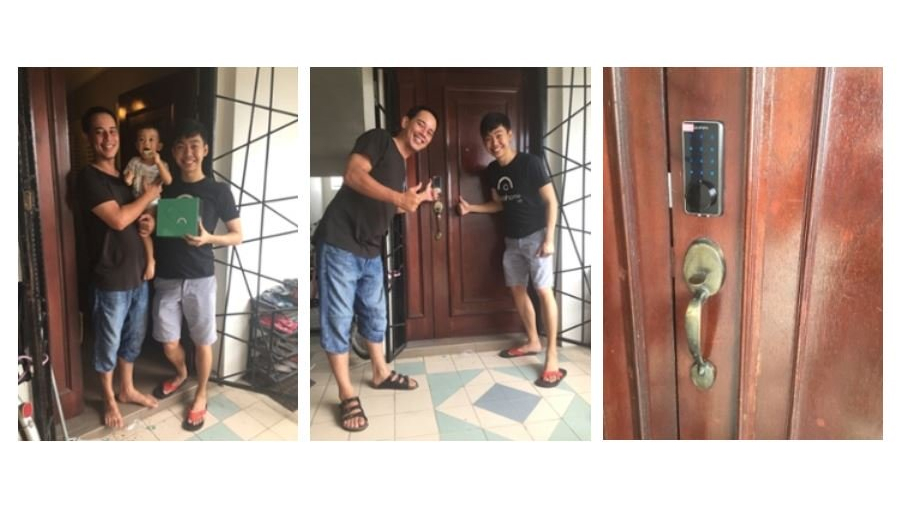 A short while back, we held a Facebook Father's Day Giveaway, and 2 lucky winners won themselves a free igloohome smart lock with installation! After getting in touch with them and sharing the good news, we let them select their installation dates, and headed down to their place to get everything set up for them.

Eddy, his wife, and their 5 children moved into their apartment 3 years back.

He was thrilled when he heard that they had won the igloohome smart lock, and was planning to teach the children how to use it so they no longer had to manage keys to get into the house.

Eddy mentioned that his mother sometimes comes over to his place to visit, and it would be great to be able to create a PIN code remotely for her.

Eddy's door had an existing deadbolt lock, together with a press-down latch. As the hole for the deadbolt was the same size as the one required for the igloohome smart lock, no extra drilling was required.

We removed his old deadbolt, and fit our igloohome smart lock on at the same location, ensuring that the internal wiring was in place. We took a few measurements after the front panel was attached, to make sure that it was straight, then secured the back panel to the door by screwing it on tightly.

Eddy was very pleased with the lock and the installation. As an IT software specialist, he loved igloohome's new 'Easy Unlock' feature on the app, which can be left on throughout the day so that he did not even need to tap 'Unlock' on the igloohome app each he wanted to enter the house using Bluetooth.

He said that he really liked our smart lock and was intending to share about it with his friends!

Before we left, Eddy also said that he was considering buying the latch version of the igloohome smart lock for his room door for additional privacy!

A couple of weeks later, we headed down to Angela's place. She is a new home owner and moved in just 3 days before we went down for installation. When we were there, she had contractors over at the same time to set up her new TV as well.

Angela told us that she had been very surprised to find out that she was one of the winners in the Facebook Giveaway! Her mother had tagged her in her own post, and she had gone on to tag her husband and a friend.

As with most new HDB flats, Angela's door had an existing mortice lock on it (to find out more about the different types of locks, you may wish to refer to this blog post).

It was explained to Angela prior to the installation that we would install the deadbolt model of our lock above her existing mortice. Our partner installer used tape to mark out the spot on the door at which the bore hole would be drilled, then proceeded to create the hole.

Angela mentioned to us that her mother had originally already thought about getting a digital lock for her and her husband, as her mother had seen such locks before in electronics stores and was fascinated by them. Our igloohome smart lock came at perfect timing for Angela and her husband!

Angela also shared that when she was still staying at her mother's place, she used to throw the keys back into the house when she left. However, there were a number of times during which she reached home and nobody was there, so she was left stuck outside the house. She then had to go to her grandmother's place to get a spare key. She said that she was glad that she wouldn't have to face that kind of situation again, now that she had keyless access.

Angela was particularly impressed with the feature of creating temporary PIN codes via the mobile app. She said that a lot of her and her husband's friends stayed in the vicinity, and were planning to drop by. Being able to grant access remotely, she could let them into her house even when she and her husband had not reached home yet.

And so we left our 2 new happy igloohomies to experience the convenience of keyless access!

Prizes worth over $30,000 are up for grabs in igloohome’s first design challenge

How it works: Airbnb Connect