5 Weird Locks You'll Be Surprised Were Ever Made 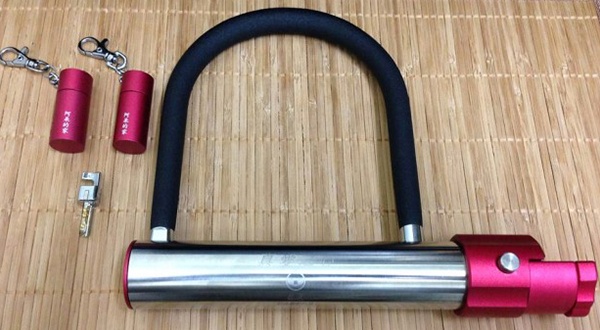 The amazing thing about human beings is that we are always coming up with new ideas. Those ideas can be magnificent and beautiful displays of human ability, and they can also be weird missteps in inventive thinking.

One thing is for sure: Until an idea goes mainstream, it just seems weird. Whether it is the telephone, airplanes, or even the Internet, it just seems odd. Some people even call some of these attempts silly.

The physical security industry has its fair share of such oddities. In the modern age we are seeing the rise of digital and smart locks but there have been many stumbling blocks that have gotten us to this point. When every single criminal is always trying to outsmart our locks, people go to some very desperate extremes. Everything from wild keys to crazy looking keyways has been tried. Needless to say, none of these ideas have taken the market by storm. They remain weird landmarks in security history.

This lock originally came on the scene as a bike lock but moved into the door lock market. Even though the lock got a bit of exposure in the lock community, it never really captured the attention of the general public. The weirdness of the design is quite unique. Starting by just looking at the lock, you can tell there is something different about it. There is no keyhole! In order to access the keyway, you have to pull the plastic end of the lock forward. This will allow you to rotate the piece of the assembly closer to the shackle. Then you grab the key, which is found in a small pill-shaped case. Essentially you drop your key into a slot, close the slot by rotating it back to hide the keyway, and then you slide the plastic covered end back into position.

By rotating the separate actuator, which does not control the locking mechanism, you turn the key you are no longer holding. Most critics preached the horrible impracticality of the design, but people always attack the things that they do not understand. And attack it they did. Because of how oddly the lock worked, the company claimed it was un-bumpable, unpickable, and perfectly secure. People got into it in a variety of ways, and that was the end of the Forever Lock’s rise to stardom. Now it is just another weird lock people never knew existed.

Tubular padlocks are a very odd site as it is. Often tubular locks are relegated to vending machines, ATMs, or even cam locks for cabinets. But that is not the weirdest thing about these tubular locks. What is weird is how unassuming they appear. Just a tubular keyway, but wait...there is no notch to tension the lock. A protective ring surrounds the keyway and covers up a good part of the exposed hole. Tension is achieved when a small ball bearing falls into a hole bored into the key. If you were looking to pick this lock, you may assume that the ball bearing could be used to tension the lock, but it is too weird for such a simple solution.

There is a pin right behind the ball bearing, and no room to work. Standard tubular lock picks will not work in this keyway because it is not standard. It is deceptively simple freakiness. These locks are easily distinguishable by the castle that they have etched into the body, as well as the keyway. Most round keyways will have a notch that makes them look like the power button on electronics (a circle partially intersected by a rectangular line).

The Bowley lock is a recent development in lock technology. It is as if the designers had focused entirely on thwarting every type of vulnerability a lock has. As a result, you get a very different type of lock. The keyway is wide open, and there are no components (pins, disks, wafers, etc.) to be seen. From this visual information, a trained eye of even a commercial locksmith may assume that you are dealing with a lever or warded lock. This is not the case. It is still using traditional pin tumblers, but with a weird twist. Take a look at the key. It appears to be a hook, and that is the odd difference that gives this lock's craziness away. In order to open the lock, first you insert the lock with the serrated side of the hook facing down.

One 180-degree turn later, and the biting is now facing up. Then you push the key into the lock, and this will tension the cylinder. It will also cause the pins to drop. That is very different than most devices, which simply raise the pins in the lock. By having the pins fall, the lock is made even more resistant to bumping attacks. What makes it so weird is the operation, and subsequent protection. By keeping the pins so shielded you get a level of security that no one has patented until now. The odd operation of the key is a concern for most people, but the company claims that the key will not break easily, and the opening routine is not as counterintuitive as most think. Only time can tell if this will be the future of locks, but what we know now, is it is weird.

Also known as the Yale Pancake Lock, this lock is almost 100 years old, and it has the oddity that only the past century can provide. The locking mechanism it uses is known as a push-lever system. This is different from your average run of the mill lever lock that actuates the levers by turning the key. In the case of the Yale Model 1094, you insert the key and open the lock by pushing it farther into the keyway. You will immediately notice the weirdness of this lock by seeing the key, which is a flat piece of metal that has rectangular cuts on the end instead of along the blade.

If a lock picker were to see the small elliptical cut in the bottom of the lock they would be baffled. The weirdness would continue once a pick is used to probe the different nooks and crannies of the design. The concealment of the locking mechanism makes it very hard to access from the outside. There are no obvious ways to pick or bypass the device. Unlike a traditional pin tumbler or even an average lever lock, all six of the levers need to be picked simultaneously. Once all of the levers are picked you would then need to push them all deeper, still at the same time.

This Polish lock has many unique aspects that make it quite odd. The keyway looks as if it is just a tubular lock, but once you see the pins you will know there is much more going on. It is a tubular dimple lock with four cuts on each side. That is a total of 16 pins. To give you some insight into the weirdness of that, I should tell you that most locks have an average of 5 pins. In very high-security locks, that number will go as high as 7. The operation of the lock is also weird.

In order to fully extend the two bolts on this lock, you need to rotate the key three times. For full retraction, it requires three rotations in the opposite direction. If you were going to try and pick this lock, that would require you to pick all 16 pins 3 times. One for each rotation. Still think it isn’t weird enough? Well, it has a built-in alarm. So if you are planning to do whatever magic you need to open this lock without the key, you are going to set off that alarm. The Gerda just throws in everything and the kitchen sink, and what you end up with is one freaky lock.

Whether you want to load your key into your lock like a bullet; spin, push, and turn it; push and turn it; or just push it, there is a weird lock that can help you realise that dream. As time goes on the number of weird locks is sure to increase. Security is never far from the minds of the masses, and it will never be perfect. Lock manufacturing is an uphill battle, and the tool we need for combat is weirdness.

There is most certainly security that can be achieved through obscurity. By using locks that people don’t know exist, you will give most burglars a run for their money. Make sure that the locks that you use are always practical for your lifestyle. Nothing is worse for your security than making it too difficult to use. If you have your own idea of a strange lock or a lock that you think is exceptionally odd, be sure to leave a comment below.

A Beginner's Guide to Home Automation

The role of smart locks in the midst of social distancing

The Rim Lock and Key Fob have landed.