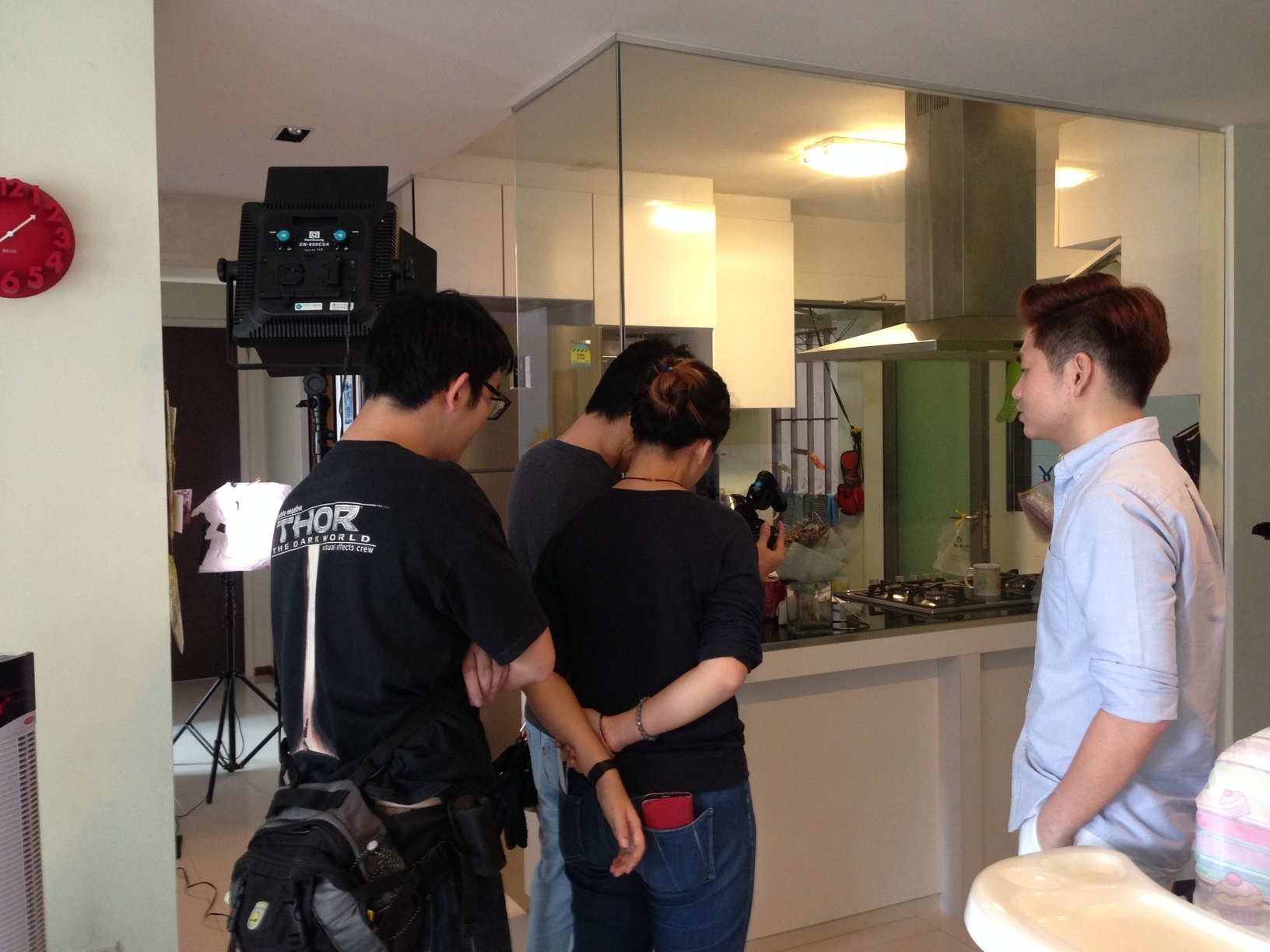 Last week, we filmed a video to show how a home owner's life is made easier with the igloohome smart lock and mobile app. Members of our team made guest appearances in it, and so did the lovely Stephanie from Helpling, one of our home cleaning partners!

So here's how the story goes:

Michelle is a busy working mother who wants to manage her home well, but spends a lot of time in the office.

Sound familiar? Many of us are becoming increasingly time-strapped due to career commitments, and need to juggle work and domestic responsibilities.

Rather than sit at home on a weekend while the part-time helper cleans the home, Michelle creates a PIN code for her helper so that she can let herself in even on a weekday, when Michelle is at work.

Here, we have Stephanie (acting as the helper) in action! She was extremely sweet and patient even though we had to take multiple takes for the different scenes.

Later on, Michelle's brother Kenny swings by her house with an ice-cream cake. As we all know, food delivery tends to be a bit tricky. You want the food to be fresh (or in this case, at least un-melted), but you may not always be home when the food arrives. Leaving it outside the house means letting it spoil. With more online grocery delivery services recently, it would be a lot more convenient if the one sending the food over could leave the food directly in the fridge!

And we show how this can actually happen. While still in the office, Michelle simply creates a one-time PIN code for Kenny and sends it to him.

We get quite a lot of questions on whether the home owner needs to be in bluetooth range to create a PIN code, and thought that we should demonstrate in our video that this is not necessary. You could be on the other side of the world and still create a PIN code for a visitor to enter your house. This blog post explains how the igloohome smart lock works offline.

Not long later in the video, we see Michelle's son Samuel arriving home from school, after being dropped off from the school bus. We had the most adorable little boy walking up and down the corridor just to get the perfect take for our video! He was smiling throughout the entire video shoot, and looked extremely pleased to be involved.

So Samuel uses the bluetooth key on his smartphone to unlock the door. It's fuss-free and efficient. Even better still, Michelle gets a notification on her smartphone that Samuel has entered the home, so she is assured that he's safe at home (this is a feature that will be released soon!).

Michelle can also access her lock's activity logs to see who has entered her home, and at which time and date this happened (yet another feature to be released soon!). Michelle also sometimes even accepts Airbnb guests at home. With igloohome's automated PIN code generation for Airbnb guests, check-in is a breeze for both her and her guests.

And so the igloohome smart lock and mobile app essentially have made management of home access much more convenient for Michelle.

Smart Keybox 2: When & Where To Use It